Internationally popular and appraised ultra-long cycling races have reached the Baltic states. On 4 June this year, the first Baltic ultra championship in road cycling will take place in Sigulda. The participants will have to complete an 800 km long circuit within the control time of 42 hours.

The objective of the competition is to develop the culture of ultra-long distance races in Latvia and to determine the fastest and most enduring racers of the Baltic states.

On 4 June 2022, the first Baltic ultra championship in road cycling will take place in Sigulda, Latvia. The competition will be organised in accordance with international cycling regulations, by adapting them to local requirements and conditions. Cyclists from Latvia, Lithuania and Estonia are invited to participate in the race to determine the most enduring and fastest cyclist of the Baltic states.

The route of the 800 kilometre distance will go along the highest asphalt roads of Latvia and Estonia: the total sum of climb metres – approximately 4,200 metres. In some places the roads will take cyclists higher than 260 metres above sea level.

The participants will be tasked to follow the marked route on navigation devices, while the fans will be provided with the opportunity to follow the race live online at Trackcourse.com, because every participant will be provided with a GPS transmitter. It is important to note that this ultra-long competition is included on the official list of cycling competitions of the Latvian Cycling Federation.

After the start in Sigulda, the participants will have to visit the following control posts:

On the 800 km route there are four control posts: 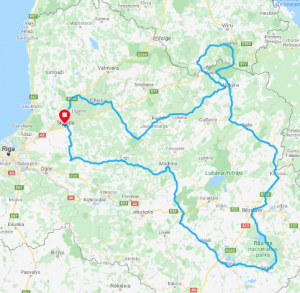 The route has been established in a circuit that the cyclists must complete in a counter-clockwise direction.

10 days before the start, the participants will receive GPX files with the route, which can be uploaded to their personal smart devices and/or cycling computers.

The route is not marked on site, the traffic is not closed or limited during the competition.

The participants shall plan their rest breaks and meals themselves.

The route will lead along asphalt roadways with a diverse quality of asphalt surface. The possibility that road repairs could be in progress at some sections of the route must be taken into consideration, which may interfere with the progress of the participants. The 4,200 metres of climb will provide additional difficulty, as the roads are characterised by pronounced terrain.

After the start and before the finish the participants will have to climb the 27% steep and 500 m long Sigulda hill.

Each participant will receive a medal for the completion of the distance at finish.

The winners in the men’s and women’s group will receive the Baltic Ultra champion’s cup.

A lottery of 3 prizes from Velomens will be organised among all finishers.

The total pool of prizes in both distances – EUR 3000.

The most important equipment:

The Core Principles of the Regulation:

In the future, the most enduring road cyclists will be determined during the Baltic Ultra race every year.

What are you looking for?